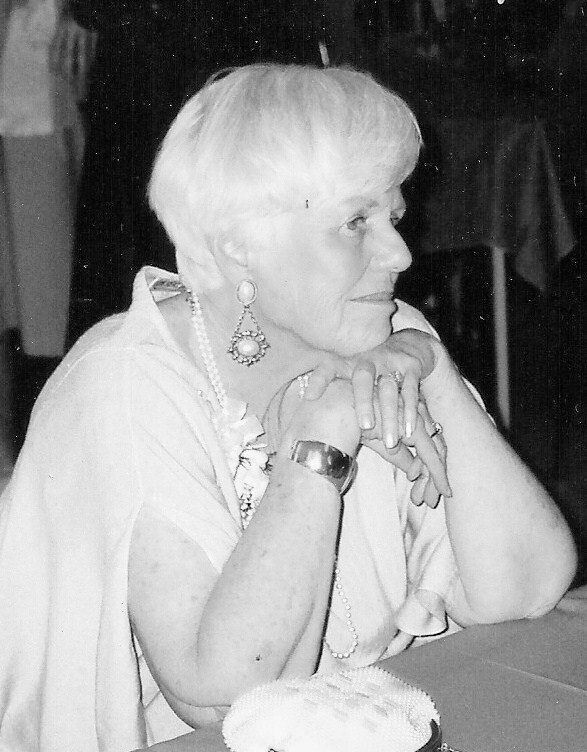 (Arvilla) Jean MacLean (Nee Lawson) was born in Detroit 1931. She lived her very early years in California but most of her childhood was spent in the home of her grandparents, Arvilla (“Billy”) and George Henry Matthews in Fort William. She won a full scholarship to Queen’s. Within a few months, she was chosen to play Audrey, a simple country wench, in the Drama Guild’s “As You Like It”. William, an equally simple country bumpkin, was played by Douglas MacLean. He stole her heart, and in 1951 they were married. The romance continued for 70 years.

Their first two years of marriage were spent in Leamington where Jean, urged by the local minister, took a teaching position. They moved to Willowdale in 1953, where Jean attended the summer course of “Normal School” (Teachers College). Son, Don, was born that September, followed by Wendy (1955), Heather (1957) and George (1965).  In 1957, Jean and Doug bought a cottage at Outlet Beach (Prince Edward County). In 2019, eager to continue the legacy of family gatherings, they passed the cottage on to the next generation.

Jean’s quiet leadership involved her in many significant changes. When the family moved to Pointe Claire, Quebec, in 1962, she was horrified to find she could not open her own bank account because of archaic Civil laws. Heather was ready for kindergarten but the schools in Quebec only started at Grade 1. Jean was asked to teach in a local cooperative, which led her to be a strong advocate for early childhood education, and the reform of education in Quebec in the 60’s.

In the ferment of these years, she was a “gentle” feminist. She taught early childhood and special education, and completed her MEd at McGill, while also raising a family. She and Doug were active in the Queen’s Alumni Lakeshore and Montreal Branches.  During her term as President of the (women only) Queen’s Alumnae, she spearheaded the amalgamation with the (male only) Queen’s Alumni. She served as a director of the new Alumni, then as a member of Queen’s Board of Trustees, receiving a “Herbie” (Herb Hamilton) Award for outstanding volunteer leadership. Jean had a special fondness for the Ban Righ Center, which supports women returning to Queen’s as mature students. Her beloved Doug established the Jean MacLean Endowment Fund, in her honour.

With an early retirement, Jean and Doug moved to Kingston. They divided their time between Florida, the Cottage and the Condo, and travel. They had time to enjoy their grandchildren.

Jean’s lifelong love for learning and teaching included a wide exploration of contemporary spirituality and interfaith wisdom. She taught Sunday School when “the New Curriculum” of the United Church was introduced. She loved its breadth. She greatly enjoyed the Chalmers women’s lunch book group. She often quoted Omar Khayyam, and loved the poem, “Abu Ben Adam” (Leigh Hunt). Today, in the spirit of Jean’s wise and open heart and mind, we write for her: “Write her down as one who loved all God’s beloved kin, of all genders, colours, races and ages.”

She will be profoundly missed by Douglas, her children: Don MacLean (Cindy); Wendy (Michel); Heather (Kirk); George (Kaori) and grandchildren: Angus Rennie (Gavin); Chester Rennie (Erika); Will Roy (Ravlin); Bonnie Roy (Thomas); Fraser MacLean (Zoe) Jin Don MacLean; and great grandchildren: Faye, Isaac, and Harlowe.  Special thanks for loving care over the past several months to the helpers from Evolve, who are just like family.

Jean died July 8,2021. Donations in memory of Jean may be made to the Jean MacLean Fund, Queen’s University, or a charity of your choice.

A private family service celebrating Jean’s life will be held in the chapel of the James Reid Funeral Home, on Friday, July 16, 2021, at 2:00 pm.  All are welcome to watch a live stream of the ceremony.  CLICK HERE FOR THE LIVE STREAM