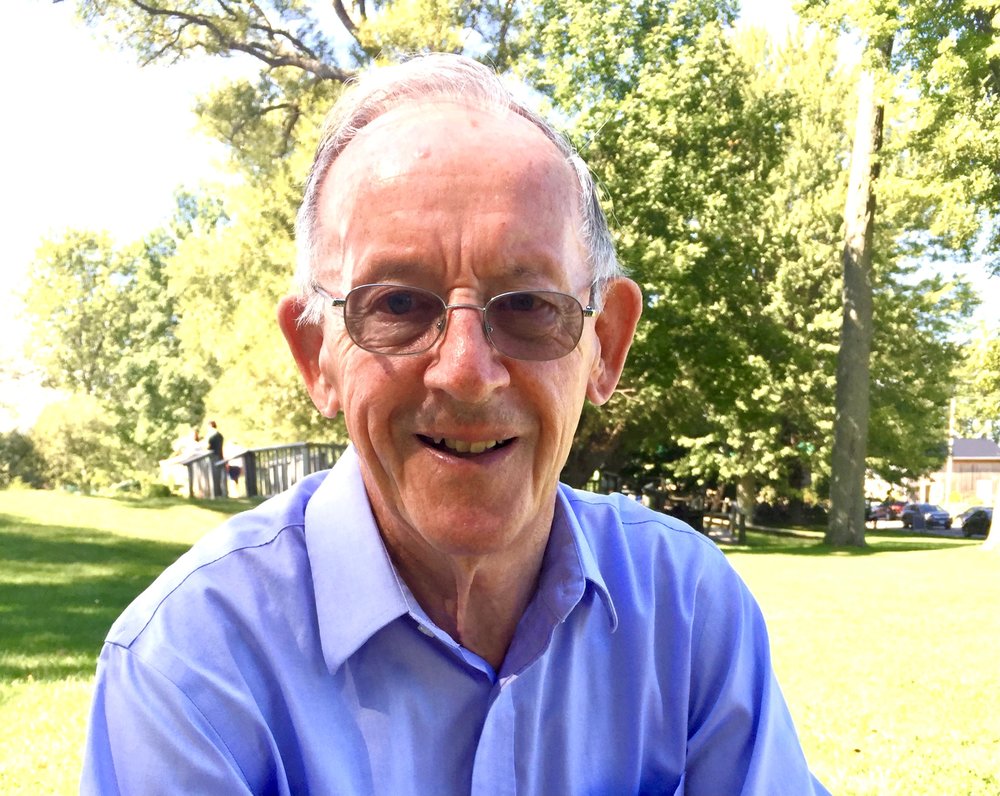 Ronnie’s family is saddened to announce his death from pneumonia.  He died at home, with his family at his side, peaceful and comfortable in the study he loved, surrounded by his books, his collection of maps and masks, and with a view of the back garden and Lake Ontario that gave him so much happiness for more than 50 years.  He had been living with Alzheimer’s for many years, but did so gracefully without losing his gentle nature.

Ronnie met Marjorie in medical school at Queen’s University Belfast, where they both graduated with honours in 1955.  After graduation, they travelled together to Montreal, returning to Belfast in 1957 to get married.  However, the draw of Canada and opportunities for specialist training in ophthalmology and paediatrics drew them back to Montreal.

In 1964, having completed surgical fellowships in both England and Canada, Ronnie was recruited to the fledgling Department of Ophthalmology at Queen’s University in Kingston. When, in 1973, he was appointed Head of the Department, he placed particular emphasis on resident training and the management of glaucoma. He recognized the value of collaboration with other departments of ophthalmology especially in Quebec, Toronto and Vancouver.  He travelled with Orbis to Turkey and Cyprus to teach surgical techniques to less experienced surgeons and he also attracted residents from the Caribbean to study at Queen’s. Under his leadership until 1991, the Queen’s residency programme became one of the most sought-after in Canada. Upon his retirement in 1997 as Professor Emeritus, Queen’s established the RMH Pinkerton Lecture in Ophthalmology in his honour.

Rugby played an important role in Ronnie’s life.  As a school-boy at Methodist College Belfast, he was a member of the 1949 Ulster Schools’ Cup championship team.  At Queen’s University Belfast, he played on the 1st XV and was selected to tour North America in 1953.  His rugby career culminated in 1957 when he was selected to play for Quebec against the Barbarians, a touring team of top players from England, Ireland, Scotland and Wales. Though Quebec was badly beaten, he himself earned accolades from the Montreal Star newspaper, which wrote: “the Quebec forwards gave their finest display in many seasons as they often gained possession from the scrums with Hooker Ronnie Pinkerton playing a great game.”  He retired from rugby shortly afterwards to protect his hands for surgery, but maintained a life-long interest in the game, following international matches with friends from the pub and travelling to Chicago in 2016 to witness Ireland’s historic victory over New Zealand’s All Blacks and to Hong Kong to enjoy the Hong Kong Sevens.  He took great pride in watching his son Andrew and grandchildren Nicholas and Elena pull on their boots and take to the pitch.

He loved his boys and supported them unconditionally in all of their endeavours.  As children, he took them to Northern Ireland, across Canada and to the Caribbean.  His hard work allowed them all to pursue advanced university educations.  He welcomed their friends into his home and, as their families grew, he became a devoted fan at all the hockey, gymnastics, skating, soccer, sailing and rugby competitions that followed.

Ronnie once said he regretted that his medical education did not allow for more study of the arts.  Nonetheless, he had a great appreciation of theatre, music and visual arts and over the years he developed a personal library devoted to Canadian, Irish and classical history, cartography, poetry, and philosophy, amongst other subjects.  With Marjorie, he regularly enjoyed the plays and concerts on offer in Kingston, Toronto and Stratford. In retirement, he explored an interest in watercolour painting, with landscapes, beaches and coastlines being his favourite themes.  This interest in art and culture led him to travel extensively with Marjorie to all corners of Canada, throughout Europe, China, Australia, Africa, Mexico and points in between.  He always returned full of enthusiasm and eager to share the “remarkable” experiences he had had.  In his final weeks, his favourite book was an Eyewitness Guide to Paris, with its many maps, photographs and illustrations.

During Ronnie’s time in Montreal, he was introduced to the joys of Canada’s winter and the vibrant Quebecois culture, both of which he embraced enthusiastically.  He learned to downhill ski and during the 1970s took his 5 boys on an annual ski holiday to Owl’s Head in the Eastern Townships; later he became an avid cross-country skier, particularly enjoying the trails of the Gatineau Park and the Laurentians.  With Marjorie, he travelled throughout Quebec, enjoying its cuisine, landscapes, and art.  The soundtrack of his final years was La Bottine Souriante, whose lively jigs and reels never failed to inspire him to tap his toes and drum his fingers to the beat.

Ronnie was a kind, and courteous man, somewhat reserved, never seeking attention for himself.  That said, he had a wry sense of humour and if you were fortunate enough to be seated beside him at the dining room table, you were sure to be treated to a number of witty observations, accompanied by a raised eyebrow or soft chuckle.  And this was after he had dazzled guests with his ability to carve the lamb or roast beef – with surgical precision - into the finest slices imaginable.

Throughout his years living with Alzheimer’s, Ronnie received constant, tireless loving care and support from Marjorie. She kept him happy, active and engaged in life, and helped him safely navigate the pandemic.  She would like to thank the doctors, nurses and caregivers who rallied around Ronnie so well during his final illness, particularly Dr. Lawrence, Dr. Hunt and Dr. Hagarty and the many caregivers at Home and Community Care Support Services – South East coordinated by Tanya Tugnette, at VON/Smile coordinated by Kim Thompson and at Home Palliative Care coordinated by Dr. Hagarty.  Thank you also to Jocelyn and Paul from Comfort Keepers who kept Ronnie safe and comfortable through many long nights.  A special thanks to Jean Alexander whose constant supply of chocolate chip cookies for Ronnie always produced a happy smile.

Cremation has taken place.  A celebration of Ronnie’s life will be held when public health conditions permit.  Donations in Ronnie’s memory may be made to Médecins Sans Frontières.